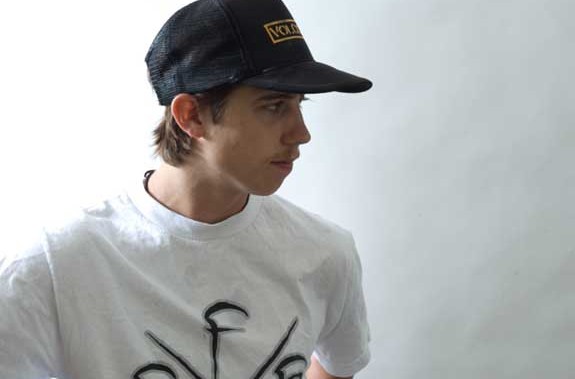 Hi David, how are you doing?


Where did you grow up?
In Issaquah, WA - just east of Seattle.

Was it good skating there?
Oh yeah, I loved it and still do, nice and gritty.

How did you get discovered in the skateboard world?
I had some bad ass reps that worked hard to get my footage to the right people, and then there just was some random events that I never would have known shaped my whole life.

What was your biggest surprise when you got behind the scenes in the industry?
Photos getting ran that are bails! I fuckin hate it. Its not fair to anyone.

If you had to choose a regular day job, that had nothing to do with skating, what would it be?
Not sure either a gunsmith or something that involved lots of outdoors and no drug testing.

How much is that?
To the point where your fighting David Gonzales blacked out, and then everyone is bummed on you, and you have no idea what happened.

Do skaters in general have an alcohol/weed/drug-problem?
The good ones do.

Do you prefer to grind the rail or ollie the stairs?
Take the rail for sure, I fuckin hate drops with no transition.

Why?
Just would rather do something where it didnt send a shock through my body even when I land the trick.

What´s your step-by-step approach to grinding a big rail?
Good music certainly helps but not through headphones

What´s the most tech trick you´ve ever done on a ledge?
Damn, I had some tech tricks back when I was younger and was more into that stuff. I guess my favorite was kickflip back tail 270 out. If I did that now I would go fuckin ape shit

How did you feel when you met your female identical twin on last years King of the Road?
Thought it would be a good way to warm my chick up to sleeping with another girl.

What´s the best thing about being a pro?
Travelling and making a living from skating.

The fear of what comes after skating, putting a level of stress over the one thing that you always used to get away from it all.

How did you end up on Creature?
Fuckin lucky as hell and I couldnt be happier with it.

Do any of your Creature team mates scare you?
Willis sure did, when he was on mushrooms, and Stu did when he was on all sorts of things but not really.

Why do you think Gerwer wouldn´t answer me when I asked him if his Wallenberg kickflip was a hoax?
That aint no hoax.

What´s you best memory from Copenhagen?
Oh man! I have some great stories from there that will be with me forever. Getting " dirty beers" with the Spot Light crew is at the top of the list.

Did you skate the Wonderland Bowl in Christiania?
Oh yeah, tried to play Penny for a bit.

What did you think about it?
It was awsome me and Roberto Aleman had a sick session.

What did you think about Christiania?
It was wild, saw a girl fall over and break her jaw all gnarly.

What do you do when you´re not skating?
Smoke and play video games, shoot guns, kick it with the lady, deal with bullshit around my house.

Are you coming back to Denmark in the forseeable future?
I hope so, I really have had a fuckin amazing time there.

Do you have a retirement plan?
Hopefully be a stay at home dad and have a rich sexy woman.

Which make are you the most proud of?
By "make" do you mean trick i landed? Not really sure I just battled a trick for about 3 hours the other day and I haven´t been that happy to land a trick in a long time. It was a really long crooked grind that will be in my Creature part.

Top three places to skate?
Any where I haven´t been and the Issaquah Park.

Your favourite skater?
Way too hard to pick one.

Anything else?
Nah, i think I´m good unless you want a random rant about how much of a dumb whore that "Channel West Coast" bitch is. (the cunt Rob Dyrdek made famous for some reason) GO AWAY AND GIVE BACK ANY MONEY THAT HAD TO WITH SKATEBOARDING!